3 Artists who use words as a form of expression 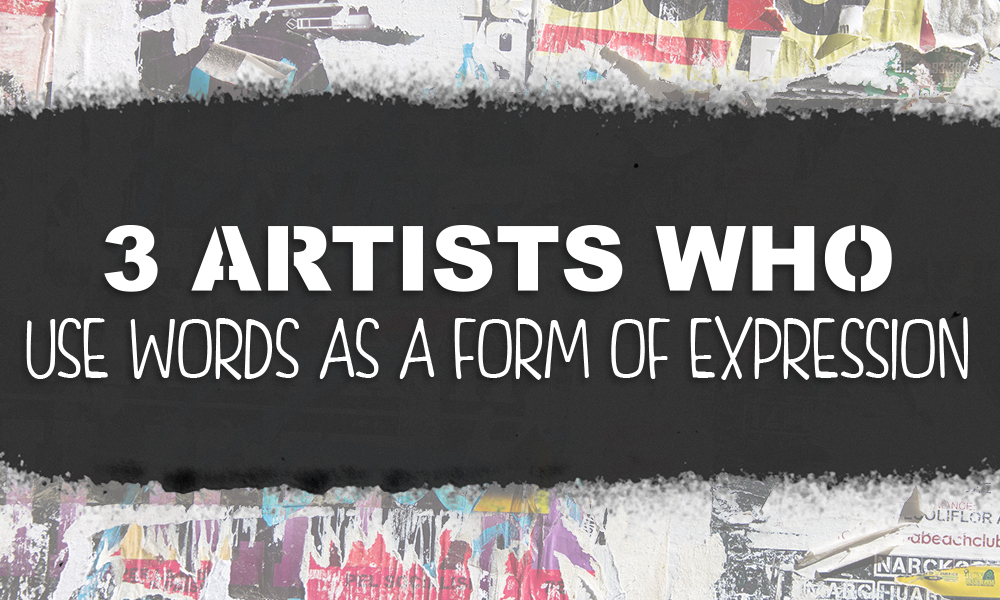 The idea of visual art usually brings to mind paintings or photography focused on people, nature, or still objects. However, the world of modern art includes many creators who use the written word to make a point. By carefully choosing words and fonts, they can craft works that literally share a message. Here are three artists who use words in their creations.

This Japanese creator was a multimedia artist in her own right before meeting and eventually marrying Beatles singer-songwriter John Lennon in the 1960s. In fact, it was her art that first caught his eye. Ono is known for using artwork as a form of activism, expressing opinions on feminism, pacifism, and more; her artwork has also included words. For example, her 1966 piece Ceiling Painting asked viewers to ascend a white ladder and view the word "YES" written above in small font, a call to positive thinking. Ono also created "instructional paintings," or collections of words that directed the viewer to make her own artwork. Her piece Painting to see the skies was constructed of words on a page and simply told the audience to do just that:

"Drill two holes into a canvas. Hang it where you can see the sky."

Yoko Ono's unique use of art and the written word has earned her several awards, including Australia's prestigious Oskar Kokoschka Prize. Today, she can still be found creating music and art, and engaging in activist activities for today's most pressing issues.

One of Yoko Ono's sources of inspiration was a French-American named Marcel Duchamp. Duchamp was a revolutionary cubist and dada artist who sometimes used found objects and the written word in his pieces. His theory involved challenging the viewer to explore the idea of how words can change her impression of the main subject of the piece. One example of this approach was his 1921 sculpture Why Not Sneeze Rose Sélavy?, a compilation which included these words underneath a birdcage, thermometer, marble "ice" cubes and cuttlebone.

Duchamp also made a splash when he painted the words "R. Mutt 1917" in a scrawled font on an inverted urinal and called it art. This piece, Fountain, played with the idea of how environment and position gives purpose to everyday objects. Duchamp died of heart failure in 1968.

Not all art is found in a museum. England-based artist Banksy has made a name for him (or her) self using graffiti as a form of visual communication. Arguably the most intriguing thing about Banksy is the fact that no one knows the artist's identity. Regardless, their controversial and often satirical art can be found on walls, bridges, and streets all over the world. Many of Banksy's pieces feature words in various fonts that ask the viewer to think deeply about their environment. For example, a piece in a gentrified Canary Wharf town simply reads, "Sorry! The lifestyle you ordered is currently out of stock".

Though Banksy is a street artist, their work has actually ended up inside museums as well. The exhibit Banksy versus Bristol Museum includes a bucolic landscape with the words "HOME SWEET HOME" dripping over the scenery in white paint. Banksy continues to be a prominent and mysterious artist who gives new meaning to the word "graffiti."