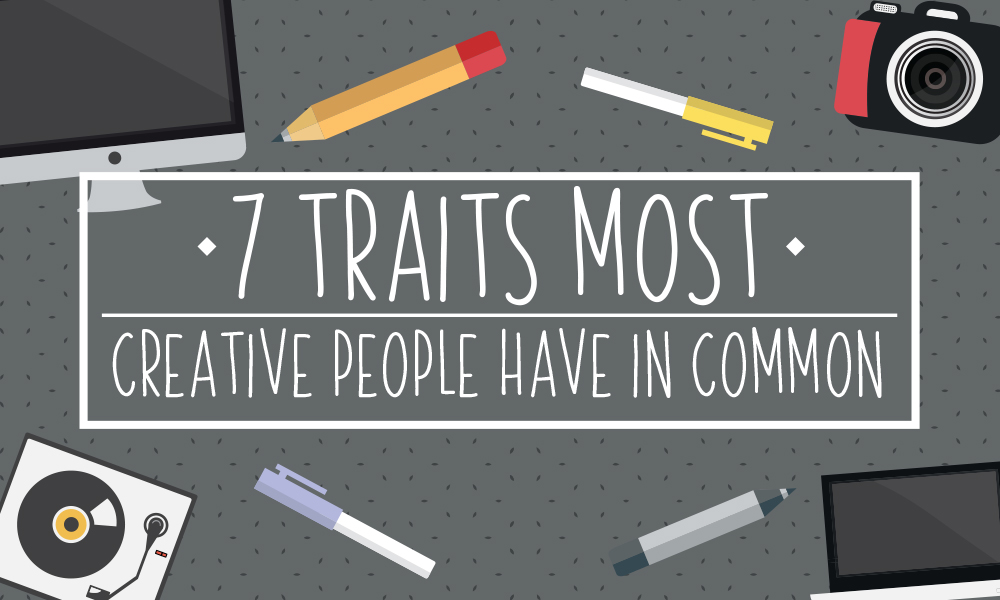 7 Traits Most Creative People Have in Common

Creative people seem to have the ability to pull amazing ideas out of thin air and put them to practical use in ways you may never have thought of. There are several traits that creative people have in common that you can nurture in yourself.

The number one trait of creative people is that they have a lot of questions and an irresistible desire to find the answers. Explorers are particularly curious, searching along the borders of what is already known.

Whether it's Jacques Cousteau exploring the depths of the sea or Neil Armstrong walking on the moon, these explorers had an insatiable curiosity.

2. They Tend to be Introverts

If you're a creative introvert, it's not that you don't like people but you'd rather spend hours tinkering, drawing, writing and in general immersing yourself in your interests.

The Wall Street Journal reports that introverts are able to focus for longer periods and put their emphasis on creating something rather than seeking self glory. Bill Gates and Mark Zuckerberg are both considered highly creative and successful introverts.

Not being afraid of failure goes hand in hand with being a risk taker. Inc., however, points out that it's important not to confuse the two. It's not mistakes that usually lead people to be creative and achieve success, but creating a culture of risk taking.

Vera Wang is a well-known risk taker who took the chance in several careers, such as ice skating and magazine editing, before becoming a world famous fashion designer.

If you're creative you need to be constantly doing something. A restless mind is more likely to be starved for stimulation. Although most people are doing something almost all of the time, it tends to be the same routine.

Creativity and childlike qualities go hand in hand. People who are childlike don't really view anything as impossible. They also tend to have a lot of fun while they're achieving the impossible. The ultimate example of childlike creativity is the fictional Willy Wonka from the classic book and movie Willie Wonka and the Chocolate Factory.

Real life examples of people who were childlike include Charles Shultz and Walt Disney. These individuals probably wouldn't have been able to create their amazing characters without remaining young at heart.

Creative people are usually leaders, not followers. This means they are self-directed and can work well without supervision. According to General Psychology, Jonas Salk had his best ideas right after suddenly waking up.

Salk, the inventor of the polio vaccine, stated he would sit there and visualize his ideas after this happened. He would then form a concrete plan he would follow through on.

7. They Embrace Their Own Pain

You've probably heard the expression "You have to come out of your comfort zone," many times in your life. This, however, is one of the primary traits truly creative people share. Forbes states that giving up the security of what is known is essential to creating new ideas and opportunities.

Creative people are willing to dig deep into themselves and embrace painful situations in their lives to create something better in the long run. Entrepreneur Sir Richard Branson is known for venturing out of his comfort zone and facing difficult problems head on.

It can be argued that many creative people are born with these types of traits. You can, however, make a conscious effort to incorporate these characteristics into your everyday life. You can increase your own creativity by being more curious, taking more risks, working independently, and embracing your own failure in positive ways.