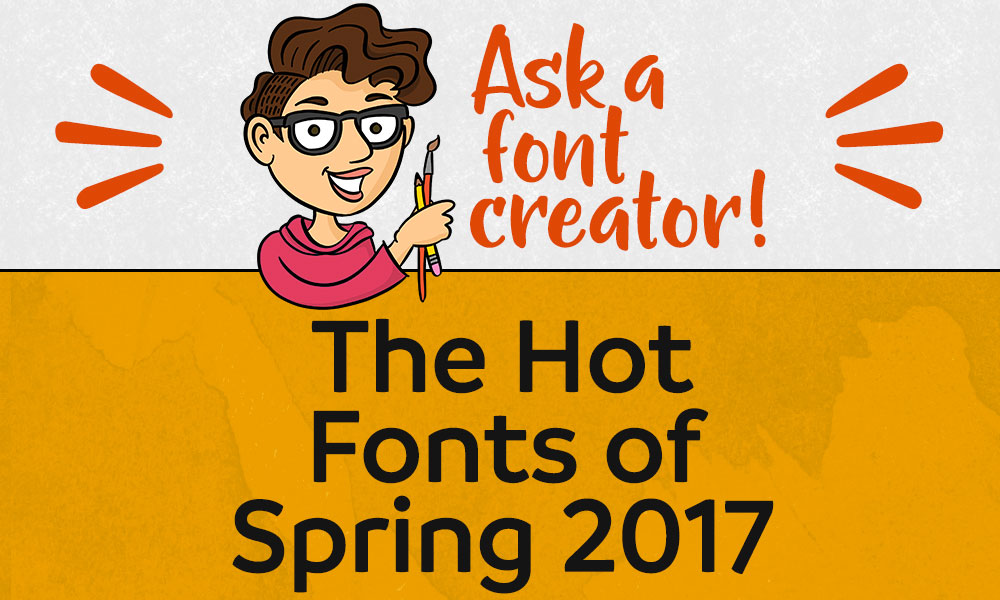 Ask a Font Creator: The Hot Fonts of Spring 2017

If you’ve visited the What Font Is This group on Facebook, odds are you’ve seen me around. That’s because I like to keep my finger on the pulse of what fonts people are looking for. If you’re working with fonts a lot, I highly advise keeping up on the popular stuff – your clients are most likely going to ask for some of these, because they’ve seen them around.

(Sometimes I wonder if there’s a secret Pinterest board somewhere that all of the clients go to for their font source images. We see some of the same ones pop up over and over again. If you know where that board is, let me know, will you?)

One of the group members, Tiffany from On the Spot Studio, frequently puts together images with a list of fonts that are currently popular. So we’re totally going to follow her lead here, and talk about this season’s font hotness. I’ll go alphabetically, so as not to play favorites.

Oh, and: I'm going to use a bunch of different pangrams (sentences that include all 26 letters) for these. So get ready for some vexing, wizards, and quizzes.

Font: Bonjour (paid; under $20)
Where you’ve seen it: on a gazillion t-shirts

Bonjour is a font I identify about once a day on average. Fortunately, a lot of things include that lowercase L, which is really distinctive. It has a great hand-lettered look, slightly rough, but still smooth enough for most crafting purposes and cutting machines.

Font: Capture It (100% free)
Where you’ve seen it: on military-themed merchandise

When the standard Stencil font that comes stock with a PC is a bit too plain, lots of people turn to Capture It. The font comes pre-distressed, so it may not be that great for some purposes, but if you’re creating a print product, that extra roughness adds a really nice level of grit.

Font: Cheddar Jack (mixed licensing: free for personal use; under $10 for commercial use)
Where you’ve seen it: vinyl decals on front doors; “birthday girl” t-shirt

So it appears that the new hot thing is to put “welcome” or “hello” on your front door with a vinyl decal. And I’ve seen pictures of Cheddar Jack being used for that more than any other font. It’s a very nice semi-connected script, legible with a nice casual flair.

Font: Cutie Patootie (mixed licensing: free for personal use; under $20 for commercial use)
Where you’ve seen it: “Trucks, Superheroes, Dinosaurs, #Boymom” t-shirt

This isn’t actually the font used on the shirts I mentioned; those shirts are hand-lettered. But Cutie Patootie is the nearest font we’ve found. And that t-shirt gets posted a LOT to the What Font group. The S is particularly distinctive.

Font: KG Eyes Wide Open (mixed licensing: free for personal use; under $10 for commercial use)
Where you’ve seen it: a ton of t-shirts, including “nope not today”

There’s been a big upswing in Eyes Wide Open lately, with it appearing on a ton of shirts. Like almost all of the KG fonts, it’s a personal-use freebie. A nice, clear, easy-to-read script font!

This is a totally fun font I’ve seen a lot of lately, because it’s being used for baseball-themed stuff. It’s great on products for boys, because it isn’t too swirly or girly.

Font: Luna (100% free)
Where you’ve seen it: on everything, everywhere, forever

Luna is probably the most popular font out there these days, primarily because it’s totally free. Which is great, because who doesn’t like free things? But it’s also tough, because everyone else is using it too. If you want to make things a little more unique, you can mix the uppercase and lowercase (if you type the letters individually and scoot them into place).

Font: Magnolia Sky (mixed licensing: free for personal use; under $40 for commercial use)
Where you’ve seen it: again, all over the place

Magnolia Sky is a hugely popular script font. The full version has tons of alternates, flourishes, and extras; the free version is much more limited. Easy to identify because of the distinctive letter M.

Font: Marchand de Venise (mixed licensing: free for personal use; contact designer for commercial use)
Where you’ve seen it: “Queens are born in *month*” shirts

I made sure to choose a pangram that started with a Q for this one, because it’s the letter people love. I’m not quite sure why the “Queens are born in *month*” shirts are suddenly so popular – apparently no queens are born at the end of the year. It's totally a first-half-of-the-year thing, the birth of royalty.

Font: Melon Mojito (paid; under $20)
Where you’ve seen it: a t-shirt about how nana and mama are both sassy

I love me a hand-written sans-serif, and Melon Mojito is no exception to that love. It has a great narrow stance, except for those delightfully round Os. And a few letters have just enough of a curl to be fun, without being too overwhelmingly girly.

I’d never heard of Rae Dunn until early this year, when her pottery pieces started showing up all over the What Font group. Her work is hand-lettered, but these two fonts are among the closest matches.

Font: Pennellino (mixed licensing: free for personal use; under $40 for commercial use)
Where you’ve seen it: the “Hey Batter Batter” t-shirt

The designer of this font has “romantic font” on one of the promo images, so it may be a surprise to them that this has become popular on a baseball-themed shirt. It’s a nice script with a little roughness, but still smooth enough to cut out cleanly.

These three make up the main cornerstone of the swoopy-fancy script market. Passions Conflict and Lovers Quarrel are from the same creator, so they have a lot of similar elements. I’m perplexed by Quarrel – it appears at FontSquirrel with an open source license, but it’s also at MyFonts to buy. Possibly the purchased version is more complete, or has been updated since the free version was put out.

Font: Sweet Pea (free for personal use) / Sugar Plums (under $20 for commercial use)
Where you’ve seen it: a ton of t-shirts lately

This is one that goes by two different names, depending on if you’re getting the limited free version or the full paid version. It’s a cute and readable script, with a rare upright stance. (So many of them tilt way forward, y’know?)

Font: Vine Monogram (under $20 for personal use; under $120 for commercial use)
Where you’ve seen it: on lots of monograms, and the App Which Shall Not Be Named

It’s one of the most popular monogram fonts out there, and it’s also probably the most frequently misused, because of its inclusion in a certain wallpaper-making app. The app has since been removed from the app stores, but nobody should have been using those wallpapers to trace such a fine-lined and delicate font anyway. Right? RIGHT.

These two are quite popular on Dafont, because they’re both a bit thicker – nice for those using cutting machines. They’re both from the same designer, which is why they have some similar aspects. (Also, I love the name "Autumn in November." Always seems apt for those of us who live in the desert.)

So there you have it! I’m sure I’ve missed quite a few fonts that are making the rounds, but these are the ones that stood out to me as the most-requested lately. With several of them being used on baseball-themed merchandise, I’m sure we’ll see quite a turnover by the time summer rolls around. I kind of can’t wait to see what themes and subjects the next couple of months bring!