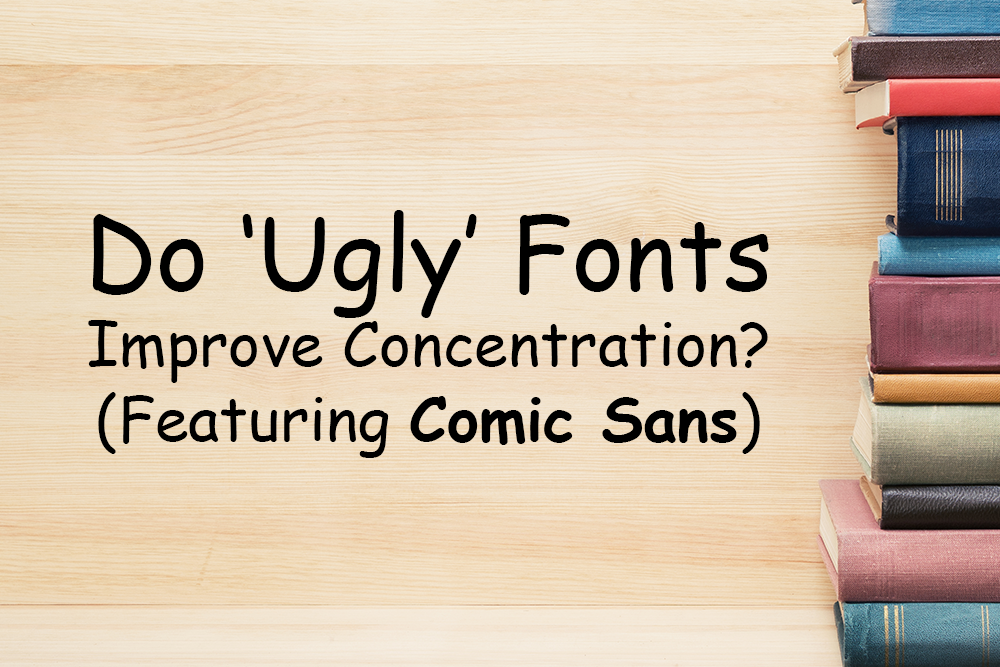 A surefire way to reap scorn, ridicule and potential banishment among typography nerds, purists and even the most basic consumers of the printed word is to set your precious prose in the scandalous outcast of the font world -- Comic Sans. In a word, no self-respecting writer of any stripe would likely be caught dead using it un-ironically, if at all. But while Comic Sans might be the proverbial bag of Cheetos to the font world's foie gras, a Princeton study on student performance across subjects found that material presented in denser and less popular fonts may actually help to increase concentration and retention of the material.


Hard-Won Gains: The Concept of Disfluency

Although conventional wisdom might suggest that making information as easy to understand and digestible as possible is the key to making it stick, the Princeton study found just the opposite to be true among participating students.

According to the study's abstract, "Previous research has shown that disfluency - the subjective experience of difficulty associated with cognitive operations - leads to deeper processing. Two studies explore the extent to which this deeper processing engendered by disfluency interventions can lead to improved memory performance. Study 1 found that information in hard-to-read fonts was better remembered than easier to read information in a controlled laboratory setting. Study 2 extended this finding to high school classrooms. The results suggest that superficial changes to learning materials could yield significant improvements in educational outcomes."


Getting -- and Keeping -- People's Attention in an Information-Saturated Landscape

In an era of information overload, the act of having to slow down and make more of an effort to process written or printed material forces greater engagement on a deeper cognitive level. On the surface, non-traditional and unexpected font choices can be catchy and help to grab attention in an already crowded field of endless blogs, articles, landing pages, memes and shrinking digital screens.


The Font of the Beholder: What Makes a Font Ugly?

It is so universal and far-reaching that the collective hatred of Comic Sans seems to have been handed down through the generations by some secret but powerful and enduring edict established by the ancient typography police at the dawn of print. But just like anything in life, beauty and ugliness are in the eye of the beholder. One man's Comic Sans or Monotype Corsiva is another's Helvetica. Your high school language arts teacher may have decreed that Times New Roman was the only way forward for civilization, only to later have an editor or art director insist that Times New Roman is in fact a crime against humanity and vision. So who is right?

In short, no one and everyone. At the end of the day, the purpose of written material is to get people to read and hopefully retain it, and drawing attention to your work is the first stage of battle. It helps to become familiar with what generally constitutes a terrible font and then make informed decisions based on your objectives and target audience.

Still not feeling the Comic Sans, no matter what the experts say? Experimenting with other unconventional fonts that will make your text stand out and make the reader sit up and take notice (and work a little harder) can also do the trick. The key is to get creative and find the perfect font for your project.