Hey there, everyone! Today we have a post about something that vexes a lot of folks who use fonts in Microsoft products like Word and Publisher: fonts with the tops and bottoms of letters cut off! Why does it happen? What can be done to fix it? What, you ask, gives?

First off, let’s get familiar with a little bit of font-making terminology: 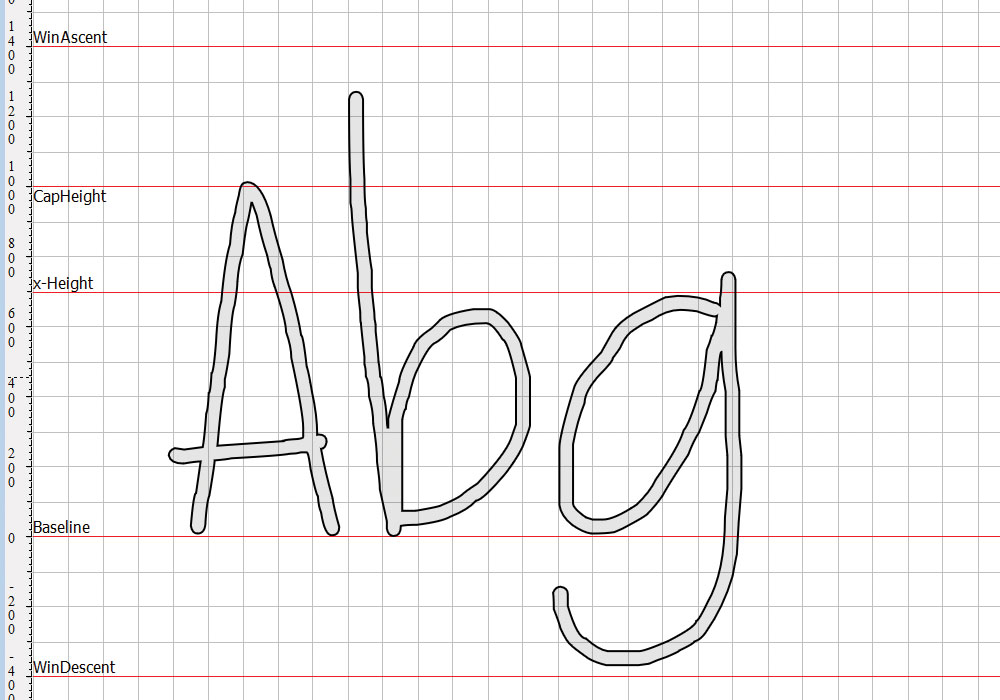 When you’re constructing a font, there are five major guidelines that you’ll be following. They are, from the top down: Ascender, Cap Height, x-Height, Baseline, and Descender. But, you may ask, what the heck do those names mean? (And you may also ask, why are those letters so jagged and weird? I’ll answer that first – I drew these letters freehand in my font creation program, because I didn’t want to pick apart any specific font for this lesson. So all of the examples will be hand-drawn, and most of them will look like a child drew them.)

Ascender is an invisible boundary at the top of your letters, and it tells programs that use fonts that the letters don’t go any taller than that. As you can see, my lowercase b reaches up toward that line, but doesn’t cross it.

Cap Height is the height that your uppercase letters should be at. I got pretty close with the top of that A!

x-Height is technically the height of a lowercase x, but it’s generally also the height of lowercase letters. In this example, look how the enclosed areas of the b and g fall right near that x-Height line.

Baseline is the floor where all of your letters stand.

Descender is the invisible boundary at the bottom of your letters, beyond which (just like the Ascender) nothing should go. You can see, my g gets close, but doesn’t cross that line.

As you can see in this screenshot from my font-making program (Font Creator, if you’re interested), the Ascender and Descender lines are called WinAscent and WinDescent. They still serve the same purpose, and you’ll see a little later where that naming difference comes into play.

There are two more invisible boundary lines that fonts have to obey, besides the Ascender and Descender:

So basically, as I’ve highlighted around the B on the right, every letter is in an invisible box made up of Ascender, Descender, Left Side Bearing, and Right Side Bearing. When you type with a font, you’re basicallylining up a rowof invisible boxes, all the same height. (They’ll vary in width – the side bearings of a B will usually be wider-set than the side bearings of an I, just because the letter itself is wider.)

(Side note: I’ve been trying to come up with a way to work in a mime joke, because of the whole “invisible box” thing. But then I figured, that would probably be insulting to fonts. And maybe to mimes, too.)

At this point, you may have figured out how some fonts have their letters chopped off at the tops and bottoms: 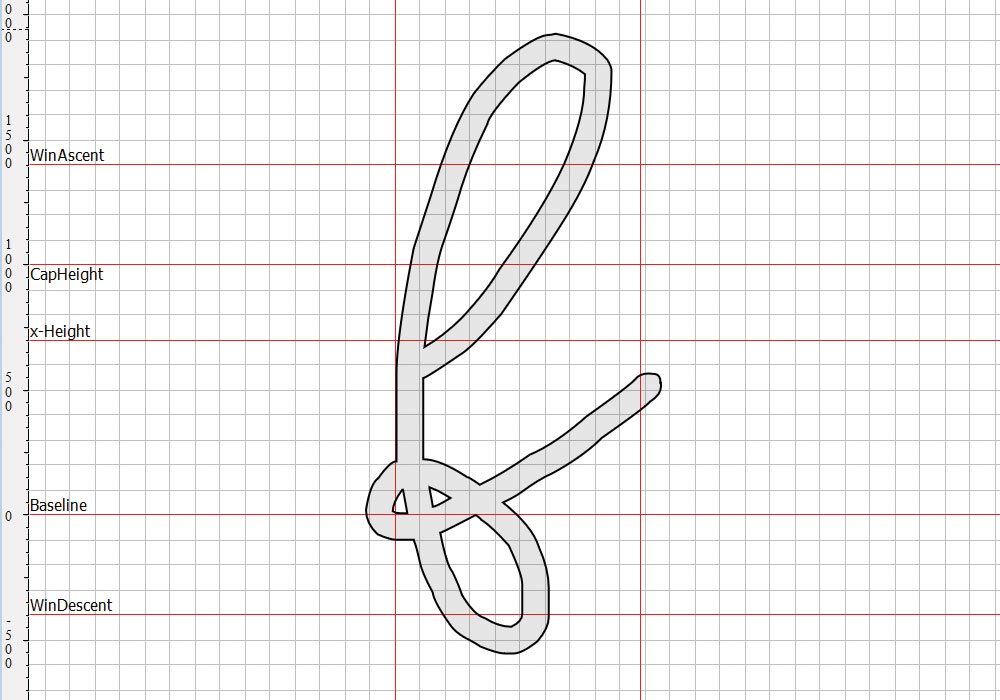 It happens when those tops and bottoms go beyond the Ascender and Descender lines.

Most design programs like Illustrator and Photoshop are actually built to ignore those Ascender and Descender lines, so they’ll display the entire letter no matter where you set the boundaries. But Microsoft’s products, like Word and Publisher, are real sticklers for obeying those lines. If that’s where the font designer said the top and bottom boundaries are, then by golly, Microsoft is not going to argue. It will only show you what’s between those boundary lines, and ignore anything outside of them.

Sometimesthere's just a little bit cut off, like if the accented characters have their diacritical marks a bit too far out: 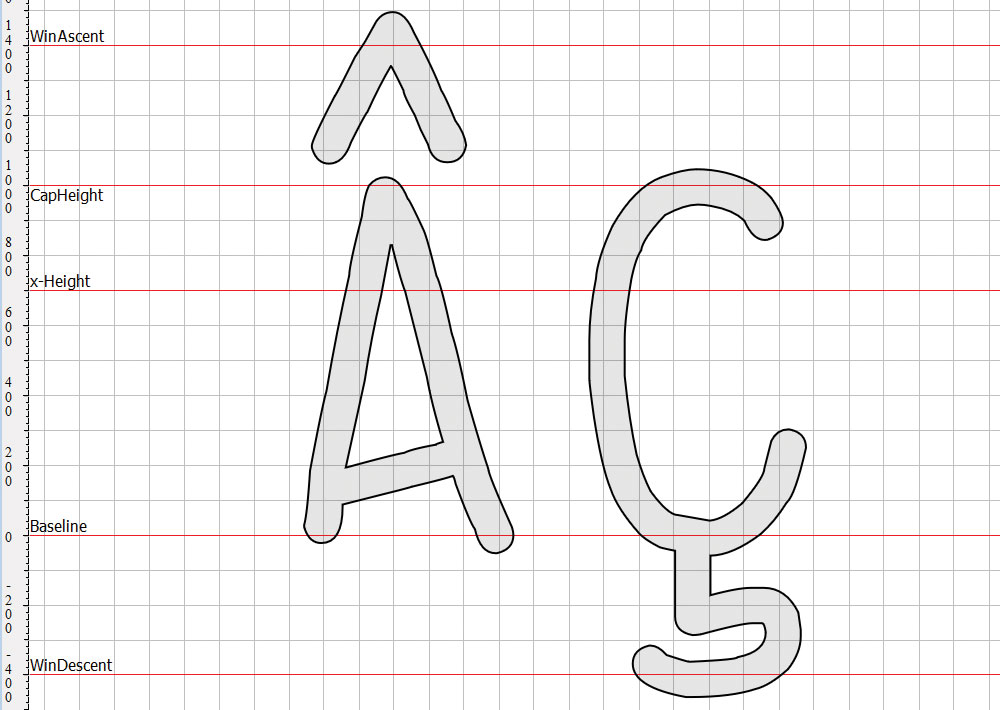 And sometimes things are REALLY chopped off, especially if it’s a font with really tall flourishes and swashes: 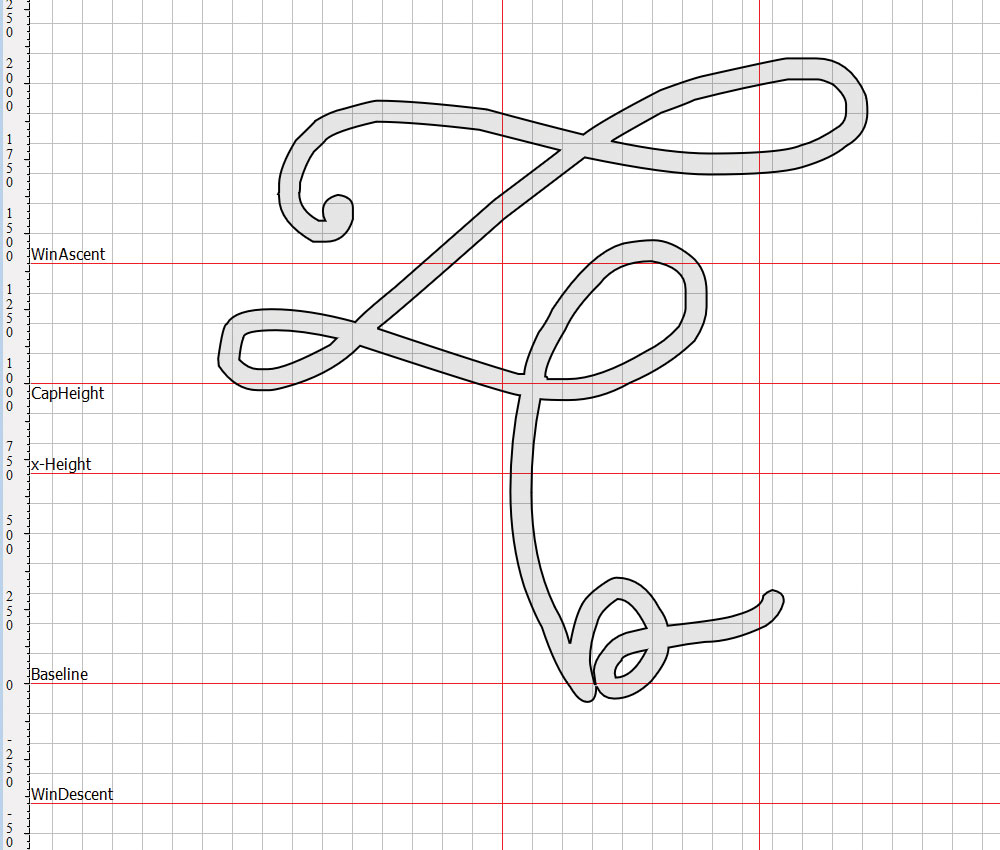 And in a case like that, it’s often preferred to have those tops and bottoms cut off, and the Ascender and Descender lines set in closer.

Well, let’s look at a couple of examples. First up, here’s a word (again, I made these really quick as examples) with a couple of swash characters, next to the same word typed out in just the standard alphabet:

Thetwo plainer "beauty" wordsabove and below each other are where you start to see why these narrower margins might be better. Yes, the big, tall flourishes are cut off, but if you’re just typing in the basic text, the lines are fairly close together. Compare that to the same words, but with the margins set outside those tall, fancy letters: 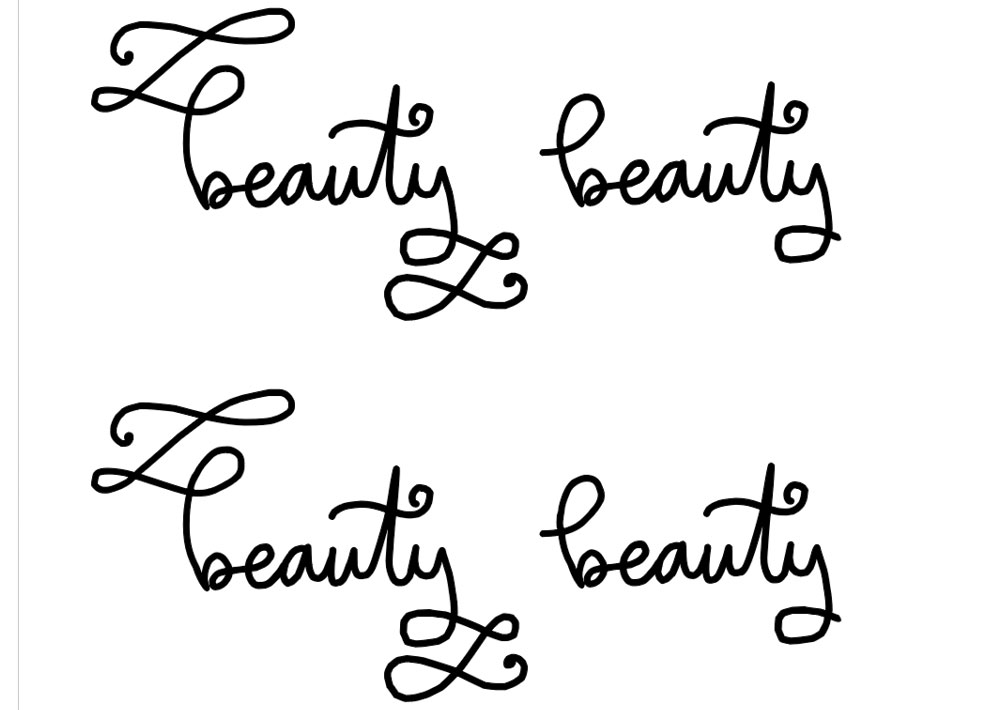 Yes, you can see the full flourishes, but the stuff typed out in regular text is WAY too far apart, and Word (where I typed this out) doesn’t make it easy to move those lines closer together.

So the designer has a choice to make on fonts like this. They can either set their boundaries far enough out to accommodate their tallest characters, but they risk making people angry because their lines of text are too far apart. Or they can set their boundaries closer in, making the line spacing work better for everyone; with the closer boundaries, users of design software like Photoshop or Illustrator will still see the entire flourish characters, so it’s win-win for them, which is why a lot of font designers go that way.

But, of course, it stinks for anyone using those fonts in Word!

So what’s a Word user to do? Well, if you got that font at Font Bundles, we can easily adjust those boundaries and send you a version of the font that accommodates the tallest and lowest of the letters, so that everything shows up perfectly in Word. (Note, you will have the trade-off of your lines of text being farther apart.)

Here’s what we do: 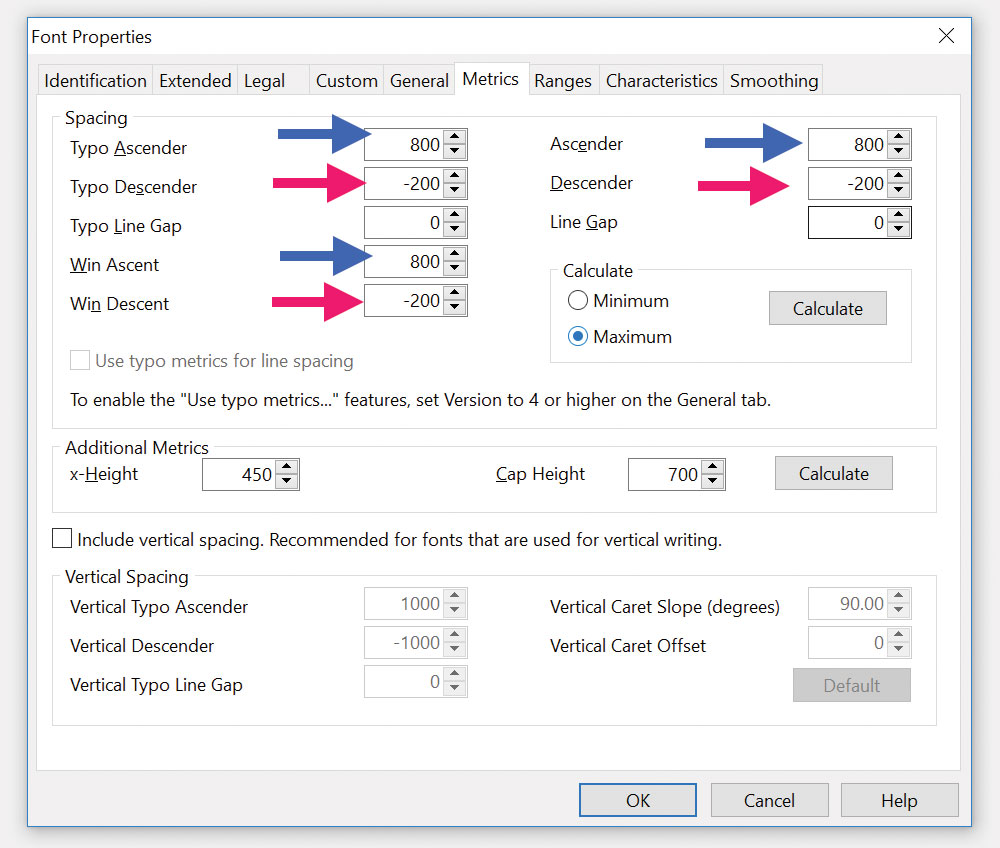 We open up the font and get into the Metrics menu. This is how it looks in Font Creator, but all font-making programs have something similar. You can see that I’ve marked three areas with pink arrows, and three with blue. The blue arrows note the spots where we’d change the Ascender value, and the pink arrows are the spots where we’d change the Descender value.

Why are there three of each? Because in making fonts accessible for all computers, some compromises had to be made. WinAscent is what Windows computers look to, while Ascender is what Mac computers look to (generally, that is – some Mac programs may look to WinAscent, and vice versa, depending on choices that the creator of thatsoftwaremade). Typo Ascender is, honestly, too complicated to get into in a blog post. And all three of these, along with the two Line Gap measurements, relate to each other in a weird, complicated, math-filled way. Seriously, you don’t want to know. I love this stuff, and it still makes my brain hurt.

So bottom line, we move those lines outward for Ascender and WinAscent (increasing the number, which is a number of units above the Baseline) andfor Descender and WinDescent (increasing the negative number, which is moving farther away from the Baseline underneath it). This expands the invisible box that the letters sit inside, so that everything shows up in Microsoft products. (And of course, this problem isn’t limited to Microsoft products, but that’s where we see it pop up the most.)

Should you be one of those Microsoft users who gets a font from Font Bundles that cuts off this way, just visit our contact page to send us a message(choosing the top option,“Technical Support”), and we can send you an adjusted version that will work like a dream!

Ask a Font Creator: Tracing and the Monogram It App