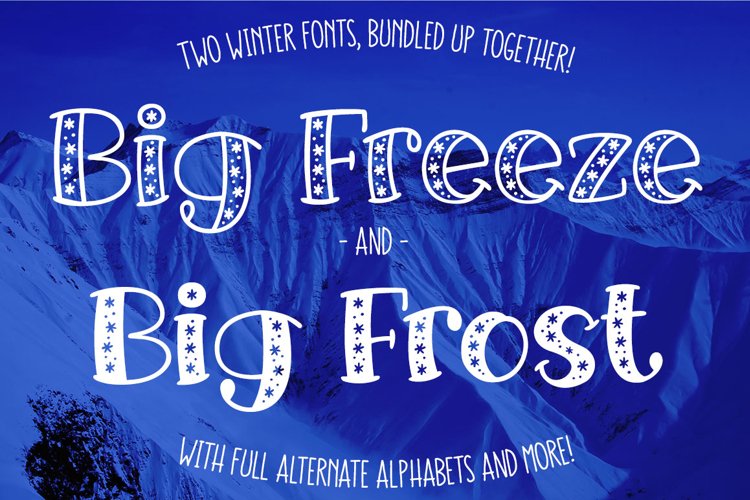 View Font Glyphs
Share this product
Just in time for the winter holiday of your choice, here are Big Freeze and Big Frost!

(And even though a lot of the promo images are Christmas-based, I made sure to keep the look of these letters not-holiday-specific, so they can be used for any wintry purposes!)

Both fonts also include a variety of smaller catchwords, including: the, and, or, for, from, with, of, by, and many others.

As with all of my fonts, these two include tons of punctuation, and over 200 accented characters each for multiple language support: English, French, Spanish, German, Polish, Romanian, Portuguese, Swedish, Finnish, Norwegian, Danish, Esperanto, Czech, Dutch, Welsh, Filipino, Turkish, and more.


The main font files contain OpenType features (alternate characters & extras). In order to use these alternates, you need to install the OTF version of the font, and your software needs to be able to access OpenType features.


Some programs have OpenType feature access built in (Adobe Photoshop, Adobe Illustrator, Adobe InDesign, Microsoft Word, CorelDraw, QuarkXpress 7+, and more). Many other programs that support Unicode will allow you to import OpenType alternates by copying them from Character Map (PC) or Font Book (Mac) and pasting them into your program.


If your software isn't friendly to OpenType features, or you need to use the TTF versions, fear not! The alternate alphabets have been separated out into their own "Plain" font files. You can still access all of the letters of the secondary alphabets, the catchwords, the wee snow flurries, and a full batch of over 200 accented characters based on the alternate alphabets. See the included PDF helpful hints guide for details!