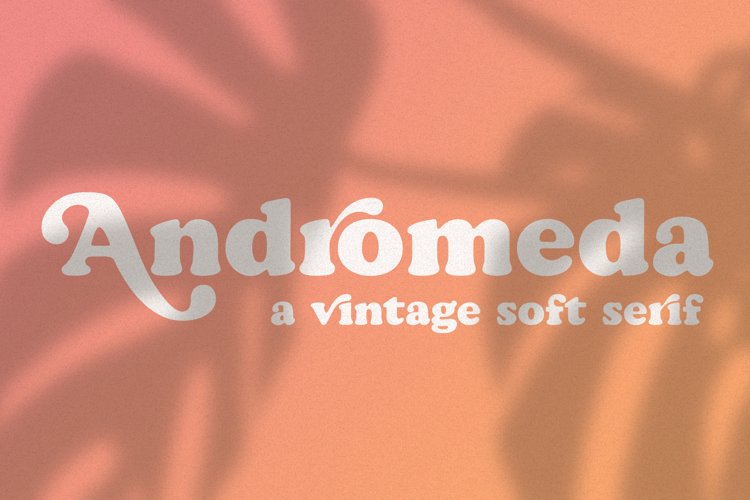 9 people have this in their cart

View Font Glyphs
Share this product
Andromeda is a vintage, yet modern, soft serif font. This retro looking font was inspired by Oswald Bruce Cooper's famous font Cooper Black. I was inspired to recreate it and add my own twist after seeing the typeface in a vintage hand lettering book from the 1970s. To make it more fun and exciting, I added several alternate letters and ligatures (with more on the way with future updates)!

Andromeda is a versatile font that can be used for a wide range of projects such as branding, social media, blogs, magazines, editorials, wedding invites, logo designs, posters, and so much more! Use the basic serif version for a bold look or add in some of the alternative letters to give your design an extra oomph! To access the alternative letters, use OpenType features to select the characters you're looking for.

Alternate characters are an OpenType feature so you want to make sure that you at least install the OTF file (OpenType Font). Once the font is installed you can access those letters by opening the glyphs panel/menu in whichever application or program you are using.

If you’re using Adobe Photoshop, select the type tool (T) and make sure you have Andromeda selected and go to Window Glyphs and then double-click on the letter you want to use. If using Adobe Illustrator, you’ll go to Window Type Glyphs.

There are plenty of other ways to access the alternate characters outside of Adobe applications, like with MS Word or with your computer’s font manager (ex. Font Book).