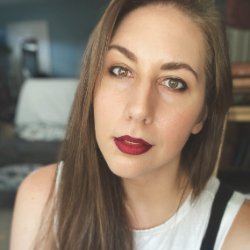 Harmonia is a sweet, handwritten all-caps font. There is both a regular version and an alternate version both with decorative alternatives for each letter. With two sets and all of the alternative letters you can get that perfectly imperfect handwritten look. Perfect for logos, social media images, creating quotes, or just adding a handwritten touch to your projects.

Alternate characters are an OpenType feature so you want to make sure that you at least install the OTF file (OpenType Font). Once the font is installed you can access those letters by opening the glyphs panel/menu in whichever application or program you are using.

If you’re using Adobe Photoshop, select the type tool (T) and make sure you have Harmonia selected and go to Window Glyphs and then double-click on the letter you want to use. If using Adobe Illustrator, you’ll go to Window Type Glyphs.

There are plenty of other ways to access the alternate characters outside of Adobe applications, like with MS Word or with your computer’s font manager (ex. Font Book).